Lebanon possesses some of the most beautiful country in the world. It is characterized by ridgelines, surrounding the bottomlands of the Mascoma and Connecticut Rivers, that are accented by a number of prominences giving Lebanon's terrain a strong, undulating form. The Mascoma River serves a dual role of linking the eastern and western ends of the City and of partitioning the north from the south. The Connecticut River serves as a landmark that defines the City limits on the west and ties the northwest section of Lebanon with the southwest corner.

The climate consists predominantly of mild, sunny summers and cold, snowy winters. The average rainfall is 35 inches, and the average annual snowfall is 76 inches with a continuous coverage range of 92 days per season. Average temperatures in January: high: 30, low: 8; for July: high: 81, low: 53.

The Proclamation states that "although Lebanon is the smallest city in the State of New Hampshire, it has been repeatedly recognized as the finest small city to live in, providing a high quality of life for all citizens through quality services, strong schools, and a close-knit community atmosphere."

The City is a healthy and thriving community that enjoys both the quiet everyday living of rural life and the cultural experience of the big City. The City of Lebanon has a residential population of approximately 13,500 with a daytime population of approximately 30,000 people. Lebanon has the distinction of being classified as one of the "100 Best Small Towns in America" by author Norman Crampton. In fact, Lebanon was ranked number 3 of the 100 small towns contained in the book. Lebanon is a full-service community and serves as the central service center for the Upper Valley.

The following resources have been compiled to help you explore life in Lebanon! 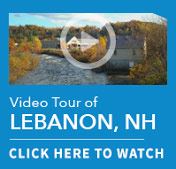