Have you recently seen someone riding their bike up a hill without using much effort? Maybe their bike looked hefty or had extra attachments on the frame? If so, you were most likely looking at an electric bike.

Electric bikes sometimes referred to as an "e-bike", are a growing trend in transportation. Pedaling is made easier with the help of a battery-operated mechanism. They are also cleaner and cheaper to operate than other modes of transportation.

Since e-bikes are a newer mode of transportation, regulations are still being developed. This article offers basic information about e-bikes and their current regulation. We encourage you to review the resources provided here for more information. We also recommend talking to your local bike shop if you are looking for information about "do-it-yourself" conversion kits.

Here are a few things you should know if you plan to use an e-bike.

What is an e-bike?

Electric bicycles (or e-bikes) look like classic bicycles but are equipped with an electric motor that assists the rider. Pedal-assist bikes simply give the rider a boost while pedaling. Other bikes have throttles that allow riders to choose between pedal power or electric motor power. While there are several types of e-bikes, none of them use gasoline or emit exhaust. They are also relatively quiet during operation.

The State of New Hampshire has established the following classes for bikes that have electric motors less than 750 watts:

Class 1 - bicycle equipped with a motor that provides assistance only when the rider is pedaling and that ceases to provide assistance when the e-bike reaches 20 mph.

Class 2 - bicycle equipped with a throttle-actuated motor that ceases to provide assistance when the e-bike reaches 20 mph.

Class 3 - bicycle equipped with a motor that provides assistance only when the rider is pedaling and that ceases to provide assistance when the e-bike reaches 28 mph.

What are NH’s e-bike regulations? 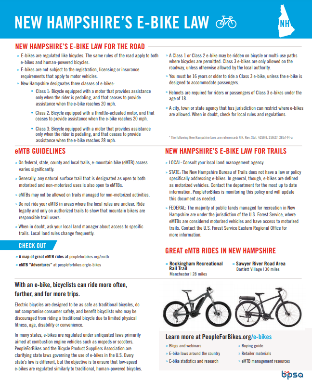 The City of Lebanon has not yet established its own local rules, though municipalities have the right to do so. Currently, all state laws apply when riding in Lebanon. Please be aware of the following:

Where can I ride an e-bike in Lebanon?

Currently, e-bikes can use on-road facilities such as bike lanes and can ride anywhere regular bicycles are allowed with some exceptions. The following information explains where e-bikes are allowed as well as any restrictions.

Currently, Class 1 and Class 2 e-bikes are allowed to use on-road facilities (e.g. bike lanes) as well as bicycle paths or multi-use paths in Lebanon. Please remember, only pedestrians and children on bikes under the age of 12 are permitted to use sidewalks, including those through City areas like the Mall and Colburn Park.

It is also important to remember that Lebanon and other municipalities have jurisdiction to pass local rules about where e-bikes are permitted. The City of Lebanon has not yet passed any of its own rules but is closely monitoring how e-bike riders and other modes interact on its multi-use paths before determining a course of action. In the meantime, we encourage all bicyclists to respect the rules of the road. If issues are experienced, per NH RSA, the City has the capacity to prohibit class 1 or 2 e-bikes on bicycle paths or multi-use paths where traditional bicycles are permitted.

What about City trails that are already designated as non-motorized?

First, always adhere to trail signage about restrictions or call the City if you have questions. If the trail has a natural surface (not paved or graveled) the City can regulate the use of e-bikes on the trail. This could apply to the City’s conservation land trails. Please use your discretion and avoid using e-bikes in any manner that would impact natural surfaces more intensely than normal, such as on local mountain bike trails. Trails often have limited visibility so please maintain safe speeds to avoid conflict with other users.

In addition to not being allowed on multi-use paths like those on Mt. Support Road, Class 3 e-bikes are prohibited on the Mascoma River Greenway and Northern Rail Trail.

We currently do not have guidance available for hand converted e-bikes. Please consider which class (1, 2, or 3) the converted equipment is most comparable to in order to assess applicable road rules. We will update the status of permitted usage as we can.

Why is it important to allow e-bikes in our community?

What is safe, responsible biking?

From the Rail-to-Trails Conservancy guide on e-bike etiquette:

Observing proper trail behavior—especially safe speeds—is not just the right thing to do, it is absolutely critical to maintaining a high standard of safety for all trail users.

The top electric motor speed of Class I and Class II e-bikes is 20 mph, and the top speed of a Class III e-bike is 28 mph. By comparison, Google Maps uses an average speed of 10 mph for their bicycle directions, and a person of average health typically cycles at about 13 mph. The average speed of a Tour de France bicycle racer is 25 mph.

In order to maintain a safe experience for everyone, cyclists—whether using an e-bike or a regular bike—must respect the experiences of pedestrians, other cyclists, and trail users by using safe speeds and signaling when passing. In short, it is user behavior, not the technology of an e-bike, that determines the trail experience.

The following applies to cycling in general, including e-bikes, and is not an all-inclusive summary.